Beth Amos sold her first novel, COLD WHITE FURY, to HarperCollins in 1995. Two more stand-alone novels followed with Harper. Despite a few years with no books coming out after that, Beth never quit writing and the first two books listed here are the result. Both were self-published by Beth along with the e-book versions of the novels that were published by HarperCollins. NICK OF TIME and THE FACE OF DEATH are currently available only as e-books. 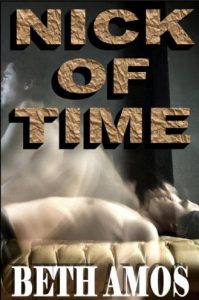 Two women separated by decades of time hold the future of mankind in their hands. Two men are tied to them by tangled threads of destiny that must be carefully unraveled. One of these men has the means to destroy the women along with most of the human race. The other has the power to unite them and save the world, but first he must find a way to traverse the barriers of time, death, and his own heart.

When Dr. Rachel Mayton learns her new miracle drug might one day lead to mankind’s extinction, she is forced to unravel the complex threads of destiny that tie her and one of her patients, Tim Nerad, to a crazed man and heroic woman who live thirty-six years in the future. In the process Rachel must divine the meaning behind her dead husband’s message, sacrifice everyone she holds most dear, and come to terms with her growing but forbidden love for Tim, a man who possesses the body of one person and the soul of another. 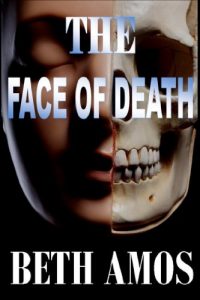 Andrea McIntyre is about to start medical school when a senseless crime turns her world upside down and takes away everyone she holds most dear. A masked killer invades her home, kills her entire family, and after having his way with her, leaves Andrea for dead. She manages to survive however, and she goes into hiding to keep herself safe. Six years later, when the killer is caught, Andrea decides to return to her childhood home, where she must face both the ghosts of that horrible night and an unspeakable truth that she is desperate to hide. With her is the one thing in life she values more than anything else: her daughter Nicole.

As she begins her residency, things seem to be looking up for Andrea. There is a new love interest, a great nanny for Nicole, and a bright future on the horizon. But it doesn’t take long for death to come knocking on Andrea’s door again. As the bodies start piling up, Nicole starts acting up, and Andrea is faced with a fear unlike anything she’s ever encountered before. Then she realizes that the face of death that has haunted her for years is not only still out there, it has a frightening hold on her daughter, Nicole. Andrea’s determination to survive and keep her daughter safe depends on her ability to recognize and expose the killer before he can carry out his evil plan. Can she do it in time, or will the face of death win again? 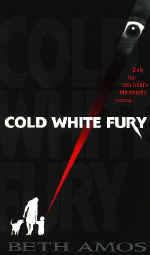 A freak accident. A tiny, unnoticed fragment of metal is embedded in an infant’s brain. Eight years later the bizarre is triggered, a phenomenon that goes undetected by medical personnel, but which may save America from a sinister conspiracy.

Widowed Jennifer Bolton is desperate to deny the strange voices that her young son Tanner has started hearing. But when their home is ransacked and their lives threatened by fearful, unseen forces, Jennifer decides to flee. What she is about to discover is that the fate of millions hangs on the strange, paranormal gifts of her innocent son. How he will use them is now left up to the two of them…if only they can survive. 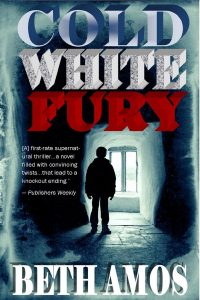 From Publishers Weekly: A freak car crash that kills geneticist Tim Bolton and leaves a metal sliver embedded in the brain of his six-month-old son, Tanner, is the core of this first-rate supernatural thriller debut. Eight years after the accident, Tanner begins hearing voices — including Tim’s — and the boy and his mother, Jennifer, find themselves at the center of a sinister conspiracy involving Tim’s experiments. Amos loads her story with intricate details that lead to a knockout ending, and she breathes life into Jennifer and Tanner through scenes filled with maternal instinct and preadolescent innocence. This tender relationship between mother and son remains the only certainty in a novel filled with convincing twists. 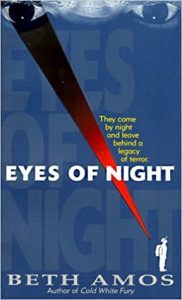 A woman is missing. There is no evidence of foul play, but certain 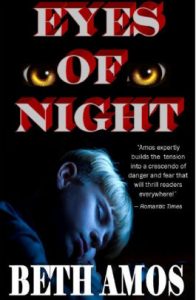 small, disturbing signs indicate that the young mother didn’t leave of her own volition. The only answer to the mystery lies locked in the mind of her terrified, silent child.

From Romantic Times: Amos expertly builds the tension into a crescendo of danger and fear that will thrill readers everywhere!

Order from barnesandnoble.com
Order from Amazon.com 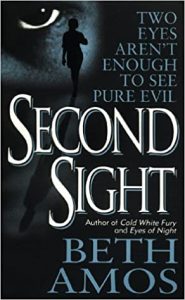 An acclaimed investigative journalist, Marlie Kaplan was headed for stardom until a story she was working on undercover went terribly wrong, leaving her blind. But through experimental surgery, she miraculously gets back partial visionand something more. Now she can also see unexplainable things, things beyond the naked eye….

Eager to jump-start her career, Marlie lands an exclusive interview with a charming yet enigmatic politician. Then the unthinkable happens; A colleague is murdered and Marlie’s the only witness. What began as a promising new start suddenly dissolves into a terrifying web of deception and death, a nightmare from which there is only one escapeif Marlie can see it in time.

From Publishers Weekly: After having been blinded in an explosion, TV journalist Marlie Kaplan is implanted with an experimental 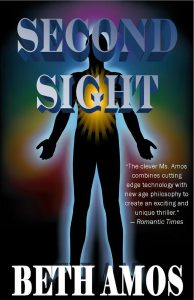 computer chip that allows her to see an energy field (the color ranges from evil black to passionate red) that surrounds everyone and reveals their hidden emotions. When Marlie happens upon a grisly murder, she realizes that the crime could have been committed by any of the three men in her life (an antagonistic detective, a sneering ex-husband and a charming would-be governor) and is forced to rely on her extra sense to find the guilty party. Writing from inside Marlie’s mind, Amos (Cold White Fury) ably shows Marlie’s attitude develop from an understandable after-surgery bitchiness to the focused thoughtfulness required of a reporter. Many readers will appreciate such exposition, but it may discourage those who like their mysteries with a little less introspection.

Order from barnesandnoble.com
Order from Amazon.com